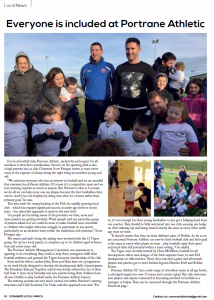 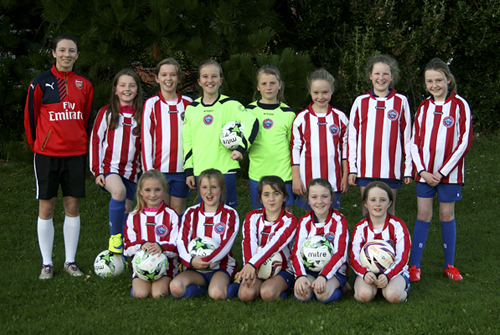 This year, for the first time in almost a decade, a girls team trained in Portrane AFC colours. The club fielded a series of very competitive female teams over the years at senior level but in recent times all our sides at senior, under-age and over 35 have been exclusively male.
That changed in March of this year when, in response to local parental demand, the club organised coaching sessions for a panel of U-10 girls.

Unfortunately, due to a lack of available competitive fixtures at this age level, it was not possible to register this team in a league. However, in order to ensure that these young footballers got an opportunity to develop their interest in the game, it was decided to hold a series of coaching sessions to help them hone their skills.

The training sessions were provided by one of the best female footballers to ever play the game locally, Aileen O’Brien. Originally from the Burrow, Aileen represented Portrane AFC and is now a highly-skilled youth coach with UEFA qualifications. For a period of six months, she put a panel of more than a dozen girls through their paces on The Green in Portrane, developing their fitness, knowledge of the game and a range of ball skills. They were kindly supported by DHL, who provided sponsorship for the squad.

Next year, this squad will enter the U-11 summer leagues and begin their first season of competitive football with the benefit of a solid six months of coaching and preparation behind them.

The season will run from April to early September in 2016 and the club welcomes expressions of interest from parents and girls interested in joining the squad, or playing football. As always, offers of sponsorship would be gratefully received and Portrane AFC would also appreciate assistance from adults or parents who might be willing to become involved in supporting Aileen with coaching and squad preparations.